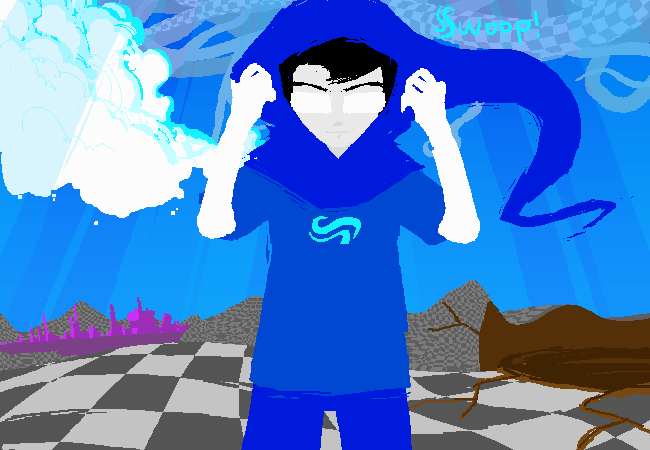 John Egbert is the main character of "Homestuck", and he is the heir of breath. Although he loves his dad, he feels strange toward his father... His fathers constant pranks and general hijinks have left him almost scared of his dad, yet he still appreciates the loving care of his father. He is a very cool person and kind of saves the world (not). After him and his friend discovered spurb everything began to come crashing down, but john kept his cool. His chumhandle is ectoBiologist. It used to be ghostyTrickster, but he changed it to avoid the trolls.

Rose is extremely Smart. She loves cats and knitting and also likes to be a bitch sometimes. She loves writing fanfiction about wizards and hates her mom who also likes wizards. Rose is a lesbian and likes a troll named Kanaya, Shes also great friends with John! She almost kill hims but its all love. Shes really cool! She uses the chumhandle tentacleTherapist. Dave Strider is the brother of Dirk Strider, his brother is gay. He is obsessed with being cool, which manifests itself in his unceasing pursuit of new ironic depths. When the original name "Insufferable Prick" was about to be suggested, he slashed the entry box right in half with a Ninja Sword because he's just way too cool to put up with that kind of bullshit. His Chumhandle is turntechGodhead. Jade Harley is one of the Main Homestucks. She has long black hair, round glasses, and a bucktoothed grin. She wears a shirt with a constantly changing blue picture on it, a belt, and a button-up long skirt.
Jade's chumhandle is gardenGnostic.
She also has a cute room-mate named "BEC" Its a penguin.

Back to Main Page .